A to Z of Political Correctness

Pinched from a well-known, newspaper, you have to read this to believe it!

Here’s an A to Z compilation of some everyday words, practices and concepts that have fallen foul of the new Political Correctness orthodoxy.

Oxford University’s Equality and Diversity Unit tried to accuse people who avoid eye contact with others of ‘racist micro-aggression’ — before it was pointed out that such advice might be seen as discriminatory against people with autism who may struggle to look others in the eye.

Transgender campaigners condemn such phrases as inaccurate and offensive. Even ‘biologically male’ and ‘biologically female’ are deemed ‘problematic’ by the influential U.S. gay rights ‘media monitoring’ group GLAAD (which used to be called the Gay and Lesbian Alliance Against Defamation, because they ‘oversimplify’ the ‘complex subject’ of gender. We’re told the correct usage is to say an individual is ‘assigned’ or ‘designated’ male or female at birth.

C is for cat’s eyes

Ipswich resident Rebecca Brewer was reported as saying: ‘I have a five-year-old daughter who was very upset the first time she saw the sign — she really thought cruel people were torturing cats.’

A council spokesman said: ‘The term “road studs” is one we now use as standard.’

C is also for clapping

Applause was banned by the National Union of Students’ Women’s Campaign over concerns that it could ‘trigger anxiety’ among nervous students. Whooping and cheering have also raised concerns. Instead, politically-correct students now show support for a speaker with a bizarre display of ‘jazz hands’, a form of exuberant but silent manual acclamation taken from musical theatre.

D is for dreadlocks

Use of this braided hairstyle by white people is said to represent cultural appropriation. When the designer Marc Jacobs was criticised for using a group of predominantly white models wearing dreadlocks in a show, he argued — not unreasonably — that this was similar to black women straightening their hair. This was met with further outrage from (mostly white) commentators who complained that hair-straightening had been ‘forced upon the black community due to beauty ideals based on white archetypes’.

E is for ‘Exotic’

An unacceptable term, which, according to so-called ‘fat-liberation activists, is used ‘to shame people who might not fit the conventional beauty standards of our society’. Contradictorily, though, anyone with a fuller figure is allowed to ‘reclaim “Fat” as an empowering identity’.

F is also for ‘forefathers’

A word that Cardiff Metropolitan University’s code of practice states is sexist (because it includes the gender-exclusive ‘fathers’) and should be replaced by ‘ancestors’ or ‘forebears’. The code lists 34 words and phrases to be avoided as part of efforts to ‘embrace cultural diversity’.

A sexist word according to Cardiff Metropolitan University, which said that it should never be used about adult women, as it is a way of belittling them.

G is also for ‘genius’

One of the words that Lucy Delap, a lecturer in British history at Cambridge, says should be discouraged as it ‘carries assumptions of gender inequality and also of class and ethnicity’.

H is for Hate Speech

Any view that departs from the social justice agenda is at risk of being seen as ‘hate speech’. Home Secretary Amber Rudd’s speech to last year’s Tory party conference was reported to police as a ‘hate crime’ by Left-wing Oxford professor Joshua Silver.

The speech — which the academic later admitted he hadn’t actually watched — had included promises of tighter controls on immigration.

I is for ‘Illegal’

This is apparently a pejorative word and therefore unacceptable when applied to migrants — even to describe those who have, indeed, entered a country illegally. One set of guidelines in the U.S. states: ‘Actions are illegal, people are not . . . The word ‘illegal’ has been applied and abused by those advocating harsh immigration policies that are undoubtedly racist and xenophobic.’ The politically correct terminology is ‘undocumented immigrants’. 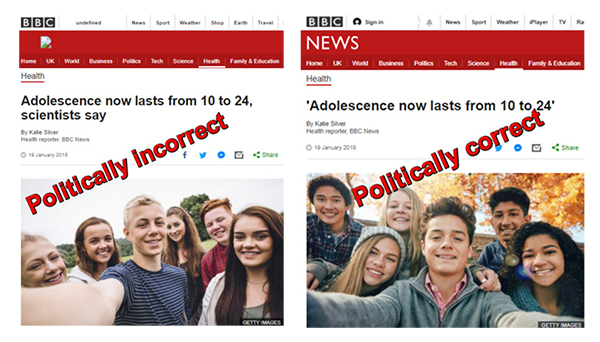 Image: changed by BBC to be more PC

J is for Jamaican Stew

This traditional Caribbean dish became a recipe for a race row when chefs at Pembroke College, Cambridge, were ordered to rethink the menu after ethnic minority students complained that the ‘Jamaican Stew’ — as well as other dishes including ‘Tunisian Rice’ — constituted ‘micro-aggressions’ against them, since such offerings did not properly represent the foods of their native lands.

K is for Kilts

Some Scots have suggested any non-Scot who wears one is guilty of cultural appropriation — particularly considering England’s long history of ‘oppression’ against its northern neighbour.

‘Scottish Gaelic culture has been subject to rampant cultural appropriation for centuries as a result of its subordination to Anglophone culture in an Anglo-centric British Empire,’ laments Michael Newton, author of Warriors Of The Word: The World Of The Scottish Highlanders.

A word deemed offensive by some disability campaigners, particularly when used in the sense of being ‘ineffectual’ or ‘unappealing’. According to the ‘Ableist Word Profile’ (an online guide that ‘explores a variety of feminist issues through a disability lens’), use of the word ‘lame’ is ‘pejorative’ as it ‘reinforces ableism in our culture by reminding people that disability is bad’.

Mother is a word that’s far too old-fashioned in our modern world where there is sensitivity about transgenderism.

In January, the British Medical Association advised members that mothers-to-be should be referred to as ‘pregnant people’ to avoid offence and ‘celebrate diversity’.

Another previously innocuous M-word frowned upon by the PC brigade is ‘man’: censors at Cardiff Metropolitan University have stipulated that ‘manpower’ should be replaced by ‘personnel’, ‘human resources’ or ‘staff’ to avoid offence to women. ‘Sportsmanship’ and ‘taxman’ should not be used, either.

N is for Native American headdress

Another victim of the cultural appropriation police. Singer Ellie Goulding was accused of racism after tweeting a picture of herself wearing one. ‘Don’t mock a dying race, you insensitive and ignorant excuse of a person,’ screeched one virtue-signalling critic.

David Beckham’s son Brooklyn was the target of similar howls of PC anger over his tattoo of a Native American Indian. Actor Colin Firth’s wife Livia faced online abuse for wearing a Native American headdress at the Isle of Wight Festival.

O is for ‘Land of Opportunity’

This phrase — often used to refer to America — is said to constitute verbal micro-aggression because it ‘asserts that race or gender does not play a role in life’s successes’.

P is for party costumes

LAST year, a senior professor at a college at Yale University had to resign after he and his wife were accused of downplaying concerns over ‘inappropriate’ Halloween costumes. He was accused of ‘creating space for violence’ and of trivialising students’ concerns because he suggested people could turn away if they felt offended by students in ‘culturally inappropriate’ fancy dress such as Mexican or Native American outfits.

P is also for pronouns

Sussex University Students’ Union warned members against using the pronouns ‘he’ and ‘she’ to avoid assumptions about identity. ‘They’ and ‘Them’ are said to be the correct, gender-neutral terms.

Q is for queens

Drag queens were banned from a Gay Pride event in Glasgow in 2015 in case they caused offence to transgender people.

Jenni Murray, presenter of Radio 4’s Woman’s Hour, upset transgender lobbyists when she said men who had undergone sex-change operations could not claim to be ‘real women’ since they did not have ‘the experience of growing up female’.

S is for Sombreros

The Students’ Union at the University of East Anglia in Norwich banned a local Mexican-themed restaurant (Pedro’s Tex Mex Cantina) from handing out sombreros to students in 2015 as part of a marketing drive. Union officials claimed the hats breached a policy forbidding stall-holders from handing out materials including ‘discriminatory or stereotypical imagery’.

S is also for ‘sensitivity readers’ increasingly employed by publishers to check manuscripts for ‘racist, sexist or otherwise offensive content’.

T is for ‘trigger’

This refers to anything the hyper-sensitive might find upsetting. Universities now widely use ‘trigger warnings’ to advise students that something may cause them distress.

This kind of alarmism even extends to classic literature such as F. Scott Fitzgerald’s novel The Great Gatsby, which is said to feature ‘gory, abusive and misogynistic violence’. Virginia Woolf’s Mrs Dalloway needs to be treated with caution because of the ‘suicidal inclinations’ in the text — a warning that would rather ruin the book if you have never read it.

T is also for ‘twerking’

THE provocative, rump-grinding dance style which singer Miley Cyrus has been accused of culturally appropriating from black musicians. Lily Allen, too, has been criticised for using black women dancers twerking in a pop video — ironic, as she sees herself as a cheerleader for right-on behaviour.

U is for Uniforms

In an attempt to appease the transgender lobby, some police forces are scrapping traditional men’s and women’s uniforms. In response to its ‘Gender Identity Working Group’, Dyfed Powys constabulary in Wales switched to ‘gender-neutral’ outfits, including a unisex hat and neckwear.

‘We have learnt there may have been times when practices and procedures have adversely impacted our trans communities and their engagement with us,’ said Dyfed Assistant Chief Constable Liane James.

V is for ‘violate’

A lecturer at Harvard Law School (whose alumni include Barack Obama) was urged by a student not to use this word — as in the phrase ‘does this conduct violate the law?’ — as it might trigger traumatic fears about rape.

It was even suggested that rape law should not be taught to protect students from ‘distress’.

W is for ‘Where are you from?’

Even the most innocent verbal exchange can become a minefield. Guidance from the University of California, Berkeley, has decreed that asking ‘where are you from?’ or ‘where were you born?’ could be racist micro-aggression — because the phrases are ‘a covert way to say you don’t belong here’.

X is for X Factor

On the ITV talent show last year, Saara Aalto from Finland was accused of cultural appropriation for dressing in a Japanese kimono and a long wig, like a geisha. With the pious relish that typifies Twitter comments, one viewer said: ‘I found Saara’s performance very offensive. A culture is not a dress up costume.’

Y is for Yoga

Another victim of the appropriation puritans: in 2015, the Student Federation of the University of Ottawa banned yoga sessions. The teacher was told it amounted to Western ‘cultural appropriation’ of a practice with its origins in Indian Hinduism. She was told: ‘There are cultural issues involved in the practice’ because of ‘oppression, cultural genocide and diasporas due to colonialism and western supremacy’.

Z is for Zero Tolerance

Defined by the Cambridge Dictionary as the ‘act of punishing all criminal or unacceptable behaviour severely, even if it is not very serious’.

It is the key policy of many lobby groups in their drive to outlaw language and behaviour they decree insensitive. The ultimate irony is that in the name of tolerance for minorities, all concept of essential and hard-won freedoms enjoyed by the majority are in danger of being lost.

The most important of these losses is, of course, freedom of expression.

Where will this madness end?  They’ll be banning Benny Hill next!  Oh yeh, they have already 🙁