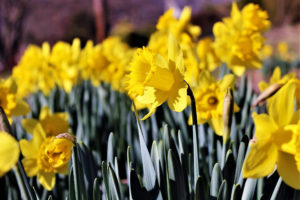 Saint David’s Day (Welsh: Dydd Gŵyl Dewi) is the feast day of Saint David, the patron saint of Wales, and falls on 1 March, the date of Saint David’s death in 589 AD. The feast has been regularly celebrated since the canonisation of David in the 12th century (by Pope Callixtus II), though it is not a national holiday in the UK.

Traditional festivities include wearing daffodils and leeks, recognised symbols of Wales and Saint David respectively, eating traditional Welsh food including cawl and Welsh rarebit, and women wearing traditional Welsh dress. An increasing number of cities and towns across Wales including Cardiff, Swansea and Aberystwyth also put on parades throughout the day.  (Source: Wikipedia)

The 1st of March is the National Day of Wales, when Welsh Culture and History is celebrated. This important day in our Nation’s Calendar should be a bank holiday, just like Ireland has St Patrick’s day and Scotland has St Andrew’s day, we should also have St David’s day a bank holiday in Wales.