Plans have been submitted to RCT Planning for a major heritage and horticulture project at Ynysangharad War Memorial Park. The aim is to build a horticultural centre and to refurbish the former toilet block and bandstand. The council is applying for Heritage Lottery Parks for People funding to carry out works in the heritage and horticultural zone of the park. It has already received £208,500 in funding and will be applying for more money in August. 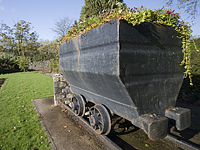 Planning permission and conservation area consent is being applied for as part of stage two of the process and includes the building of a horticultural centre in the eastern part of the park. The works will involve the demolition of a small single room park manager building, the removal of two glasshouses, the construction of a purpose-built single-storey training facility, a garden range (including a glasshouse) and screen wall and the conversion of a derelict toilet block into a parks staff welfare facility. As well as these, the plan includes a new pedestrian link between Pontypridd Lido and the woodland garden, improvements to the rock outcrop and woodland gardens, restoration and improvements to the bandstand and the sunken garden.

Stage two will also include an activity programme which includes the development of a volunteering and training programme within the park.

The horticultural training centre will provide space for education and recreational activities for members of the public and students with a training room, office, covered outside area for demonstrations and activities, potting shed and outdoor planting area.

A design and access statement submitted with the application said the scheme would bring positive benefits for the community.

This all sounds great of course but with £2 million being wasted on a new footbridge it does make you wonder about the sense of having all these different pots of money around the place, that are applied for and dished out once someone fills in the right form, rather than one central pot of either council or WAG cash.

We at www.pontytown.co.uk suggested to the council (about 20 years ago) about creating an environmental centre, very much along the lines of this proposal, in the Park, that the town’s folk could use so great that someone has finally opened those letters. Anyway, fingers crossed it will happen.