PCR Tests – Not Fit For Purpose

OK, here’s some maths for you which might be one explanation why so many people have been saying all along that the figures (stats) on mainstream media are rubbish, scary and often, just plain lies.  Scientists all said PCR tests were not accurate enough at the beginning of the pandemic BUT Matt Hancock ignored this and carried on regardless.  This post isn’t political btw, as Drippy Drakeford, as we should all know, just copied what the Tories did.  He pretends he did things differently but he didn’t.  He just altered the dates slightly.  He also said he was ‘just following the science’, when actually no-one was! 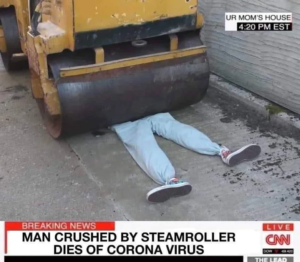 So how important is a false positive?

Well, when an outbreak is raging and there are many 1000s of real (true) positive cases it isn’t that important BUT as numbers fall it does become an issue.

False results were coming up from the beginning and we knew pretty soon that the rate of false positives was approx. 0.8% of tests. (Reason: the test picks up any strand of RNA of coronavirus that a person may have had contact with, e.g. past infections.)

Hancock even admitted that this was happening and said we shouldn’t worry as it’s less than 1%. The media, not being good with science just believed this bullshit.

BUT false positives are 0.8%.  So what you say, that’s hardly anything?  Well, what it does mean is that if you test 100,000 random people you get 800 positive results that are actually false!  So add the 100 real ones to this and we get BBC headline – 900 cases today!  Shock horror and so on.  People get scared, don’t go outdoors, lock themselves away, mental health issues get worse etc.  In other words we have an apparent x9 fold increase in positive Covid cases.

So should we be using them?

Good question.  What do you think?  At the time of writing the incidence in RCT is about zero.  It’s under 3 in 100,000 according to the BBC.  This means that in a town such as Pontypridd, where the population is approx. 30,000 we have less than 1 person with Covid.  Yet we are still locked down!

OK, in fairness they have more or less stopped using PCR tests now (no-one has it), but they are encouraging us to get Lateral Flow Tests instead – even if we aren’t sick!

Sounds crazy but as LFT are only 49% accurate according to SAGE it means there is still a chance they could find some stats to justify their control.

The good news is the election is coming soon and you have the chance to vote for anyone except out of his depth Drippy and racist Gethin.  That bit was political.

For those who want to read the science –

Are you infectious if you have a positive PCR test result for COVID-19?