I often wonder what our Celtic ancestors, or even the more recent Christian preachers, who once filled our chapels and churches up and down the Valleys, would say if they could see us hiding behind the settee with curtains drawn, TV and lights switched off, and the dog’s mouth all taped up the night before All Saints Day!… and all in fear of the dreaded knock on the door from various miniature goblins and ghouls who come calling this dreaded night, with a bag of flour and a brace of free range at hand, should we not be ready to hand over some hard earned cash or tasty treat!

For the record, the traditional Christian celebration of All Saints’ Day, or All Hallows’ Day, on November 1st came a day after the Celtic harvest festival of the dead, or Samhain. Later on changed to All Hallows’ Even’ or Hallowe’en. 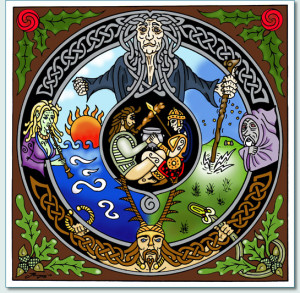 But of course these days we do little to party – pagan or otherwise. We do little to remember or celebrate why this holiday was so special. We just embrace our pumpkins and witches hats, the plethora of costumes and props sold from competing supermarkets, all vying for who can sell the most tacky, throwaway, modern American pop culture, that’s made in China and destined to end the week in Wales’ overflowing landfill. (In the United States, Halloween has become one of the most profitable holidays, next to Christmas, for retailers)

Then we moan about the eggs and flour left on our cars and streets the morning after. We moan about how Primary school children are learning the black arts of extortion and blackmail younger and younger these days. But if we must speak out why can’t we campaign to change ‘Halloween’ back to what it originally was?

True Halloween traditions survive most accurately in Ireland today, where the last Monday of October is a public holiday. All schools close for the following week, commonly called the Halloween Break and as a result Ireland is the only country where children never have school on Halloween and are therefore free to celebrate it in the ancient and time-honoured fashion. If we did this in Wales we could even ditch Guy Fawkes night (what has some dodgy English catholic who fought for Spain to do with Wales anyway?) and have our own Celtic beer and food festival, that lasts for a week and culminates in a bonfire night of our choosing. After all, if Mr Fawkes had succeeded what difference would that have made to us in third world, post Welsh Assembly Wales anyway? We’d still be poor, forgotten and oppressed. Are you listening Mr Jones?

Of course to some fundamentalist Protestants, along with conservative Jews and Muslims the mingling of Christian and Pagan traditions for Halloween, and its assumed association with the occult, mean they strongly object to the holiday and refuse to allow their children to participate in what they regard as its Satanic imagery. Whilst other more moderate Christian churches offer a harvest-themed alternative to Halloween celebrations. Other Christians correctly hold the view that the holiday is not Satanic in origin or practice and that it holds no threat to the spiritual lives of children and the lessons taught about death and mortality are actually a valuable life exercise.

Now then, hands up who’s for a week long family festival, starting on Halloween, with a week off work, where we shut off Taff Street, erect huge marquees, serve hot food, real ale, mead, mulled wine, sell local crafts and produce, have street entertainers and Welsh bands, all to help us celebrate the end of summer and aid us in coping with the coming months of ill-timed darkness and seasonal affected disorder! Until someone stops messing with our clocks of course… ah, but that’s another story…