Although most people knew this already we now have proof that our TV people are paid way too much.  Just look at what some of BBC Wales’s TV presenters earn: 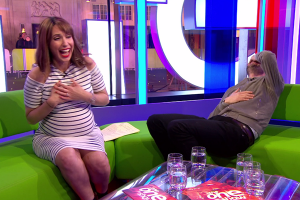 ‘Laughing all the way to the bank’

Yet the only one with any talent, one of the greatest rugby players of all time, Jonathan Davies, who commentates on the two codes, gets between £150,000-£199,999.

These levels have been roughly the same for the past decade, and slightly higher than other UK countries. The most recent figure for England is 22%, 20% for Northern Ireland and 19% for Scotland.

The median wage in Wales is about £19,126, which is also the lowest median wage in Britain.  Of course you have to include all the high earners (see above plus CEOs, solicitors, doctors etc.) to work out any average figure, which puts the ‘real figure’ for the majority of people much lower.

Jeremy Corbyn has said he does not think he is wealthy, despite his £137,000 salary.