What Has Happened to Welsh News?

Happy New Year Campers.  Thought I’d kick off 2020 with a warning about our wonderful Welsh media.

Wales Online has decided to stop pretending to be a news source this week after overpaid journalists drinking in a famous city centre pub revealed that the last cat found up a tree in Aberdare was in 1972.

‘Aye mun, Tibbles was a great story. We strung that one out for years. We did features, spinoffs and vox pops for ages.  Those were the halcyon days alright.  We recycled that heart-wrenching news every few months too,’ said Arthur Testicle, science reporter.

Official figures for the newspaper show that it has an average circulation of 13,419, down from over 40,000 in 2007.  This will only get worse of course (until the paper eventually folds) as more people find their news in the only place you can get the truth these days – the pubs the journalists don’t drink in.

Many backward-thinking commentators and news organisations still mistakenly think that the future of news is online.  They have invested heavily in this area, but to be honest they have no idea what real people think (living in their metropolitan bubbles) and very soon that medium will also fade too. 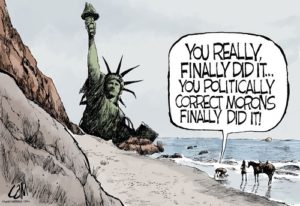 She continued, ’We now have so many adverts, popups and affiliate links to dodgy US conglomerates posing as quirky news articles when really all they are is email harvesters and generic Viagra sellers that it is almost impossible for any viewer to actually end up on our own pages.  Just as well really as we don’t bother to write anything important there anymore.

‘Of course there was a time when journalists actually investigated stories, tried to uncover the truth, read press releases and acted upon them but nowadays we just think what the hell, let’s just feed them any old shit – no-one cares about anything anymore anyway and even if they did they certainly wouldn’t believe a word we say!

‘With more and more teachers leaving the profession most people can’t read anymore or are too busy liking fake news or cat pictures on Facebook to actually give a flying fuck about what’s happening to their sad little third world country,’ she added.

Across the road from the self-styled ‘voice of Wales’, at their new Orwellian HQ, BBC Wales has revealed that their approach is very different however.

‘We are desperate not to lose the license fee which pays for our jollies, foreign travel, plush hotels and sexy Christmas parties so we take a different view.  We try to bombard the reader with so much information that they just get overwhelmed and only read the headlines.  That way we can brainwash them with our left-wing, politically correct bullshit and make them feel it is OK to ‘hug a hoodie’, ‘cuddle a Qaeda’ or bomb Israel.  We censor so much news now that we have even started to believe the crap we put out ourselves,’ said Mohammed Khan, Head of the Ministry for Information.

Some people have argued that there is a possible clash ahead when the Western Mail (a rag that has always been a big rugby paper, albeit with correspondents that know nothing about rugby) goes head to head with BBC Wales because they are fast becoming so diverse that soon everyone will be so diverse that diversity will cease to exist as everyone is or wants to be or is perceived to be or is addressed on Twitter as diverse.  (Obviously white, male heterosexuals need not apply).

‘I have a dream,’ said Spike Susan Thornberg, Head of Gay Nicaraguan Whales for Theatre Splott.  ‘Soon football will be a thing of the past and trans vegan Muslims will come together everywhere (apart from Tylorstown obviously) and join flippers in solidarity for our sisters in the Bristol Channel.’

Oh bugger, why do I bother.  I’m emigrating to Hungary – nice fruity reds there.