Did you know this about Corbyn?

Born in Chippenham, Wiltshire in 1949 Jeremy Corbyn was educated at Castle House School before attending Adams’ Grammar School in Shropshire as a day student.  He became active in The Wrekin constituency young socialists, his local labour party and the League Against Cruel Sports.  In 1966 he joined the Campaign for Nuclear Disarmament (CND) and later became one of its three vice-chairs.  He joined the labour party at the age of 17 and left school at 18 achieving just two E-grade A-levels.

After school, Corbyn worked shortly as a reporter for a local newspaper, before doing two years Voluntary Service Overseas in Jamaica as a youth worker.  He briefly attended North London Polytechnic before pursuing a career as a left-wing political activist.  By the age of 25 (1974), he was elected in 1974 Haringey Borough Council and soon began ‘working’ for the National Union of Public Employees. 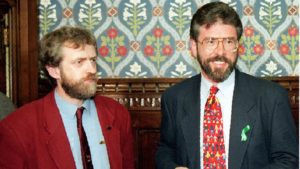 During the 1980s and 1990s, Jeremy Corbyn supported the IRA and opposed the Northern Ireland peace process.  He attended pro-IRA commemorations for terrorists and was general secretary of the editorial board of the hard-left journal Labour Briefing which supported IRA violence and explicitly backed the Brighton Hotel Bombing, which killed 5 people and maimed 31 others.

Jeremy Corbyn has been paid £20,000 to appear five times on the totalitarian Iranian regime’s propaganda channel, which was banned in the UK for its role in filming the tortured forced-confession of Iranian liberal journalist Maziar Bahari.  The Iranian regime executes gay people, democracy activists, Kurds, and orders the rape of female prisoners.  But Corbyn is happy to take their money and aid their propaganda campaign.

Jeremy Corbyn has praised and supported Raed Salah, an Islamist who has been charged with inciting racial hatred and violence, and has claimed the Jews were behind 9/11.  Corbyn has said: ‘Salah is a very honoured citizen’, ‘Salah’s is a voice that must be heard’.  He also calls Hamas and Hizbollah his ‘friends’.  Bear in mind that Hamas’s Charter is explicitly genocidal – it makes it clear its supporters want to kill Jews and repeats Nazi conspiracy theories.

As his right-hand man, Corbyn appointed Seumas Milne, who has argued we should focus more on the positives of Stalin’s communist dictatorship.  In case you’ve forgotten Stalin murdered about 20 million people by the way.

Over 170 Labour MPs have no confidence in him at all and many are leaving politics altogether as we are seeing in the run up to the general election.  Former MPs are even urging people to vote for Boris!

There are many other ‘interesting facts’ about JC that anyone thinking of voting for him must read but in the meantime just remember that this humble man of the people only earns £137,000.  And over 30 years he has claimed over £3 million from the state alone.  This is £1.5 million more than a normal MP.  Once he retires, he’s set to get a £1.6 million pension.  Mmm – the many not the few?