Growing up in the 70s and 80s I saw prosperity and austerity in equal measure, although I’ve only ever experienced the latter.  I saw the unions grow powerful which helped give workers pay rises but that was short lived when Thatcher came to power and dismantled everything.

Love her or hate her (and I was definitely in the ‘hate camp’) she changed Britain forever.  She deregulated the banks and created yuppies, desimated our manufacturing industries, closed all the mines and threw millions on the scrap heap.  She supported despotic right wing regimes like Chile, sent assassination squads into Ireland and helped keep apartheid afloat in South Africa.

She encouraged poor people to buy shares when she sold off the family silver like BP, British Gas, British Steel, BT and Rolls-Royce.  She created social housing problems and slum landlords by getting rid of council houses.  She sacrificed hundreds of soldiers lives just to win an election by allowing Argentina to invade the Falklands.  She was certainly a bad egg in my book (or should that be basket?).

But for me her biggest legacy was how she changed the whole psyche of a nation.  She created an ‘I’m alright Jack’ culture where neighbours turned their backs on each other.  She made us all selfish.  Compared to some of the more specific examples (links above) this may seem like a trivial thing but unfortunately, in my opinion, it is this ‘culture’ of ‘self’ that has contributed to the deterioration in living conditions, the exploitation of the environment, a general lowering of standards and a lack of real community that we see in today’s Britain.  In other words ‘nobody cares anymore’. 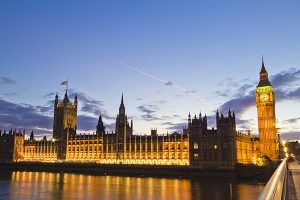 Then in the 90s politics just carried on as normal of course.  Long years of Tory oppression were halted by a minor miracle, when the Labour Party finally won a general election.  We all had high hopes for the future… but it was a false dawn as Tony Blair just turned out to be the best Tory prime minister we’ve ever had!  He continued the ruination of our schools and hospitals by increasing bureaucracy rather than decreasing it as he’d promised, and worse of all social mobility actually decreased under Blair (and Brown).

Since then of course we’ve had Cameron and Osborne’s austerity followed by May’s austerity.  So, is this the worse time in modern British politics?  Yeh, probably.  But not because of what we’ve got but what the alternative is.  Surely we now have the worst choice we’ve ever had: on the one side we have ‘more of the same shit’; a right wing junta who continue to screw the poor (think how much worse this would be under Boris or Mogg!) and line their own pockets but on the other side we have a left wing, Jew-hater who supports Muslim terrorists and illegal immigration over the white, working class majority that are the only ones who can vote him in!  It’s almost as if he wants to lose the next election?

OK, in a previous column I highlighted the differences in the Labour and Tory party policies, which even for sceptical me was a no-brainer but ‘foot’ and ‘shoot’ seem to follow Mr Corbyn around like a fart in a phone box.  The left wing parties have great policies, like ‘Save the NHS’, free university education, nationalisation of once British, but now foreign owned, industries and so on… but it’s the other stuff that will lose them a shot at power – the political correctness (see Trevor Phillips), sexism against men, positive discrimination (e.g. banning whites from standing for election), banning free speech when it suits them and open borders; which leads to over-population, rising crime, more benefit claims and strain on public services as much as anything else.

And yes I blame the media.  I always blame them I know, especially the BBC.  Not for being right wing or left wing though, but for being so out of touch with the lives of ordinary people, too politically correct and downright lazy when it comes to truthful, investigative journalism, which we still pay for (via the licence fee) under threat of prosecution.

Many believe the biggest threat we face is Brexit, but surely this has to be a good thing seeing the mess in Europe that Merkel and Brussels have created recently.  In fact, unless the EU reforms big time it is probably finished anyway.  And true ‘lefties’ want out anyway so why the lack of reporting on this?  The UK is the fourth biggest contributor (just behind Italy) to the EU.  Think about that for a moment.  Now ask yourselves if you think the EU would survive without Germany and France (the top two payers)?  Not hard to see why anyone connected to the EU gravy train is so keen on making it incredibly difficult for the UK to leave.  We will probably be just the first when we do.  Greece won’t be long, Italy is also an outside bet, as are Hungary, Poland, Holland, Czech Republic, Denmark, Sweden and even France!

But forget Brexit.  That will sort itself out in a few years.  For me there is a bigger problem here in the UK at the moment.  It is fear and hatred, and it is getting worse.  Not fear of Islam.  Not anger at the biased media.  Not head-in-the-hands disbelief for the distraction from corporate greed that is Trump, not even fear and hatred of the current Tory government (which might make sense) but the truly nasty vileness that the so-called ‘left’ portrays towards anyone who doesn’t agree with them!  I grew up a socialist, was proud to tell the world I was one, argued until I was blue (sorry red) in the face about why being altruistic was such a good thing for everyone… but now I’m all confused!  Aren’t we socialists supposed to be nice people?  Aren’t we supposed to care about others not just scream abuse at them?  Take a tour of Twitter if you don’t believe me.  Opinions are getting out of hand.

There is now a complete polarisation in British politics.  The middle ground has been lost.  Aren’t we allowed to have more than one view about things anymore?  Can’t we ban animal testing yet bring back the death penalty for paedophiles and terrorists?  Can’t we support the re-nationalisation of the railways and also deport Albanian people traffickers?  Can’t we tax the rich to pay for hospitals yet recognise that we need to increase the numbers of male schoolteachers?  Can’t we keep the ‘good’ EU laws, like environmental protection and workers rights but change the ‘bad’ ones like expensive, extra layers of bureaucracy, straight bananas, the Euro and over-population due to unrestricted migration?  Can’t we create decent jobs for white, working class men and get rid of PR firms, job agencies and Starbucks?  Can’t we have re-runs of Benny Hill, because he was funny, and still adopt the Thai prison model?  Can’t we give equality to heterosexuals and taxpayers while outlawing backward, political nonsense like Islam?  Can’t we abolish the BBC licence fee until such time as they pay their so-called ‘stars’ the minimum wage like the rest of us?

Do we have to subscribe to every tiny facet of an ideology that is being packaged and pedalled by a noisy, middle-class, London minority?  A nasty, office-based bunch of career politicians, PC-Guardian readers (but worse still believers) and useless hangers-on who’ve never worked a day in the real world, struggled to survive on low pay or benefits, or had Eritrean rapists move in next door.

And while this battle rages between the ‘rights’ and the ‘everyone elses’, who suffers?  Yep, the same poor bastards who switch off from politics in their droves because no-one speaks for them anymore.  The result is voter apathy and we end up stuck with the same landed gentry, class divisions and extremes of wealth and poverty.

I used to find myself blaming the privately-educated, people in power but the more I think about it the real villains are those who pretend to speak for us poor, oppressed masses while feathering their own nests.  Why are they so afraid to say what everyone is thinking?  Perhaps they really believe the bullshit double-standards they project?  Maybe they’re actually scared to get voted into power because then they’d have to do some actual work and carry out the people’s will!

Compare these two disgusting people – posh-git Boris Johnson and racist Diane Abbott – which one do you want running the country or with their hands on the reigns of power?  Answer?  Neither?  OK, try these two – Lord Snot, oops, sorry I meant Rees-Mogg or Shami Chakrabarti?  If these are our choices, isn’t this just a little bit scary?

So what can we do?  Easy.  Buy my ‘Happy‘ book and live by that code instead.  Oh yeh, and start being nice to people again.