Did you know this about Swinson?

Liberal Democrat leader Jo Swinson was born in Glasgow in 1980 and was educated at Douglas Academy and the London School of Economics. She has pledged to stop Brexit altogether but why would you trust her when she previously backed a referendum on UK EU membership, has a strange relationship with squirrels and after many years of hard work and faithfulness by local lad Mike Powell (who is now standing as an independent) she ditches him in favour of racist-loving Plaid Cymru?

As many people have pointed out, no matter how people voted in 2016, cancelling Brexit is far from democratic.  This is the big policy of the Lib Dems now.  Nothing to do with Transparency International (Swinson’s husband, Duncan Hames, who was an MP from 2010-2015, works for the UK branch) getting a grant of 4m euros (£3.4m) from the European Commission in 2018.

Swinson has also said she won’t work with Corbyn, even though he is ‘neutral’ (don’t all laugh at once) on Brexit.  There is also a rumour she’ll work with the Tories again (remember tuition fees) so, as SNP leader Nicola Sturgeon said, ‘it’s very difficult to trust the Lib Dems’. 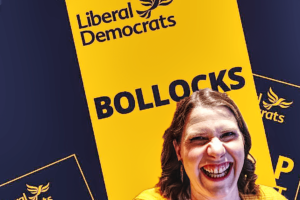 Scottish Tory sources have said informal talks are ‘ongoing’ with the Lib Dems about ensuring the SNP do not have a ‘clean sweep’ of Westminster seats at the next election.  Mmm?

This isn’t the only example of a huge inconsistency between what Swinson says and the evidence of her voting record either.  Swinson’s website claimed she’s ‘campaigned tirelessly to save our environment’.  But her voting record shows she supported the badger cull, fracking, HS2, and voted to sell off public forests.  Swinson also accepted donations totalling £14,000 from Mark Petterson, director of a company with several fracking licences.

It seems hard to trust a single word Swinson says.  In fact, it’s hard not to suspect she’ll say whatever she can to pull votes and do whatever she wants to afterwards.

“I can be the next prime minister,” the megalomaniac insisted.

The only Lib Dem policy (apart from scrap Brexit) is a £50bn Brexit bonus.  Not sure where that cash is coming from, maybe under the dumb dumb tree?

She also said that Boris Johnson, Jeremy Corbyn and their aides’ were ‘six white men stuck in the past, conspiring to wreck our future’.  What has the sex of someone or the colour of their skin got to do with anything?  Why are politicians so sexist and racist these days?  Oops, forgot.  All white men are evil and if you spout this racist, sexist crap enough times it must be true!  Yet there was no condemnation from the left – usual double standards again, yawn.

Do we want someone who insults the majority of the country as PM?  I don’t think so.

Call back in a few days and we’ll have a look at Boris.