A success story in the recent history of Ponty and its development must be the ‘Lido’. Originally built in 1927 the outdoor pool was where a young Jenny James first found her talent for swimming at the age of seven, going on to forge a career as a swimming coach and a lifeguard, saving more than 100 lives. While working as a lifeguard at the Lido, Jenny also used the venue for her physical training in her early years. She entered the Guinness Book of Records after becoming the first Welsh person to swim the English Channel in a time of 13 hours 55 minutes on August 16, 1951, at the age of 24. Jenny James sadly passed away in 2014, at the age of 87. 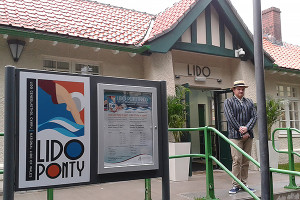 Once a thriving sporting venue the lido fell into disrepair and was seen as a blot on the landscape for many years before funding from numerous sources resulted in the maintenance and building of the present pool.

The story of our lido, which has become the National Lido Of Wales, is told in great detail at the Visitor Centre.

The Lido Ponty Visitor Centre, with full disabled access, is situated above the Waterside Café and is open to the public daily, all year round although the pool itself has limited opening times due to the seasons.

To find out more and pay a visit – click here.