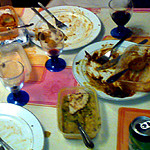 The famous Ponty Curry Club was founded in 1378, about 400 years or less before the town was invented. Cleverly disguised as a group of young men (now very old) who used to drink for a living both here in Wales and overseas, who after a few too many succumbed to the curry gland’s call and headed to the nearest Asian emporium to be satiated in the most extreme way – usually by a Madras or Vindaloo. Anyway, centuries past and the whole sorry gang stepped out of the space ship once and for all, settled in the Llanover Arms or CYB (whichever has clean toilet paper on the night) and now embark on seasonal interludes of frantic ingestion and vigorous mastication much to the amazement of their Muslim onlookers.

Recent history might be said to have started with the filming and subsequent screening of Iolo Williams’ BBC Wales outing ‘I Love Wales’. However, one female member reminisces about the time a certain founder member wandered around a Brecon Tandoori au-natural, whilst the Minex branch will often extol the virtues of elastic plate glass windows in Woodville Road as Warren (Penclawdd branch) tried to get his curry back after being forcibly ejected for swimming in the fish tank – ahh happy days! And who can forget the famous under the table adventures of Pussy Galore as the famous TV presenter’s shorts grew tighter and tighter… due to his Ghurkha Masala we’re told. A tight-knit group, but always open to offers. 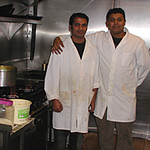 Another famous episode occurred when our favourite Bangladeshi proprietor; the late, great Mohammed, offered us an all you can eat for £7 if we’d turn up and get filmed again by the Asian media. This we did and were pleased to find there weren’t any speaking parts like Dave & Sue had in Ooty a few years back! Madras Modelling Agency my bottom, I thought they were going to kidnap us not give us a director’s chair and some veggie curry and a couple of rupees. Phew! Close shave that one.

In August 2020, while driving a camper van around Wales, Dave & Sue ventured into a Caernarfon curry house and who should be sat across the table? Iolo Williams, fresh from a recent wildlife doc filming. We ‘ate out to help out’ and he even remembered us – what a guy!

Membership to this special band of curry aficionados is by invitation only of course and subsequent vetting by the committee (as all great things in Wales). 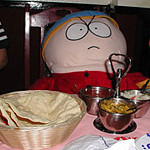 The working party is as follows:

Other important positions are yet to be elected… 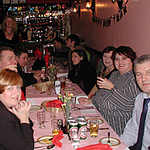 Curry Houses We Have Visited:

Local writer Dave Lewis won a runner-up spot in the 2009/2010 competition with his short story – Onions, based on the antics of a group of local characters in a valleys curry house. This story appears in Dave’s second book – Urban Birdsong, available from Amazon and direct from the author. 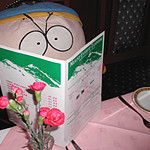 One of our old butties from the Everest has recently opened a sit-down and takeaway at the top of town.  Had a Gurhka there the other night and very nice too.  Great service, friendly staff and awesome food.  No alcohol licence as yet but can take your own wine in for a small charge. Will soon be organising a reunion of the curry club me thinks.

The ‘in-place’ now of course is Mo’s Kitchen in the middle of Taff St.  New chef and fab food.  Check them out – click here.