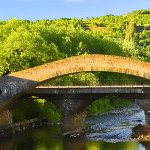 Pontypridd is famous for its old bridge, which was, when built, the longest single spanning bridge in Europe. The bridge was built by William Edwards (1719-1789). He was a Welsh Methodist minister who also practised as an architect and bridge engineer.

William Edwards was born at a farm named Ty Canol, Groeswen in the parish of Eglwysilan in 1719, but lived most of his life at Bryntail another farm in the same parish. His father Edward Dafydd died when he was a child, with reports stating that he was drowned whilst attempting to ford the RiverTaff.

Edward’s formal education was limited and his reading before then confined to Welsh literature.

Edwards was a self-taught mason who learned solely through self-study and experience. He soon became recognised as the most expert builder in the area.

The contract he signed to build the bridge at Pontypridd was with the Hundreds of Miskin and Caerphilly, who called for the building of a bridge over the River Taff and the maintenance of it for a period of seven years.

The first, a wooden bridge was washed away by floods in a storm after just two years.  The second and third, of stone, collapsed during construction because of their weight. The final design, in 1756 was also stone, but much lighter because it had 6 large holes in it… 3 on each side, of diameter 9, 6 and 3 feet. Edwards was paid 50 pounds to maintain it for seven years.

He also built bridges in Aberafan, Betws, Pontardawe and Usk. In 1857, a three-arch bridge was built alongside to make it easier for traffic to cross the river (the old bridge was a bit too steep).