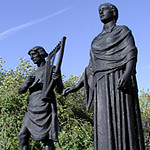 The year 2006 brought us two very special dates. The 150 year celebration of the writing of the Welsh National Anthem and the 250 year celebration of the Old Bridge. To mark these historic events we at Pontypridd Town web site were ready, willing and able to keep you informed of all the hundreds of special events promised by RCT to mark the occasion, but there wasn’t much happening so we couldn’t 🙁 Ah well maybe 2056 will be better?! Anyway, try this instead:

Land Of My Fathers*

The old land of my fathers is dear to me,
Land of poets and singers, famous men of renown;
Her brave warriors, very splendid patriots,
For freedom shed their blood.

Nation, Nation, I am partial to my Nation.
While the sea is a wall to the pure, most loved region,
O may the old language endure.

Old mountainous Wales, paradise of the bard,
Every valley, every cliff, to me is beautiful.
Through patriotic feeling, so charming is the murmur
Of her brooks, rivers, to me.

If the enemy oppresses my land under his foot,
The old language of the Welsh is as alive as ever.
The muse is not hindered by the hideous hand of treason,
Nor is the melodious harp of my country.

Hen Wlad Fy Nhadau, usually translated as The Land of My Fathers, but literally old country of my fathers, is by tradition the national anthem of Wales. The words were written by Evan James and the tune composed by his son, James James, both residents of Pontypridd, Glamorgan, in January 1856. The earliest written copy survives and is part of the collections of the National Library of Wales. The song, or Glan Rhondda (The banks of Rhondda river) as it was known when first composed, was performed for the first time in the Capel Tabor chapel, Maesteg, on 1st March 1856, by a singer called Elizabeth John from Pontypridd, and it soon became popular in the locality.

The popularity of the song increased after the Llangollen Eisteddfod of 1858. Thomas Llewelyn of Aberdare won a competition for an unpublished collection of Welsh airs with a collection that included Glan Rhondda. The adjudicator of the competition, Owain Alaw (John Owen, 1821-1883) asked for permission to include Glan Rhondda in his publication, Gems of Welsh melody (1860-64). This volume gave Glan Rhondda its more famous title, Hen Wlad Fy Nhadau, and was sold in large quantities and ensured the popularity of the national anthem across the whole of Wales.

At the Bangor Eisteddfod of 1874 Hen Wlad Fy Nhadau gained further popularity when it was sung by Robert Rees (Eos Morlais), one of the leading Welsh soloists of his day. It was increasingly sung at patriotic gatherings and gradually it developed into a national anthem.

Hen Wlad Fy Nhadau was also one of the first Welsh songs recorded when Madge Breese sang it on 11 March 1899, for the Gramophone Company. This was the first recording in the Welsh language.

Though it has no official or legal status, Hen Wlad Fy Nhadau is recognised and used as an anthem at both national and local events in Wales. Usually this will be the only anthem sung, such as at national sporting events, and it will be sung only in Welsh using the first stanza and refrain.

The existence of a separate national anthem for Wales has not always been apparent to those from outside the Principality. In 1993 the newly-appointed Secretary of State for Wales John Redwood was embarrassingly videotaped trying to guess the words during a communal singing of the national anthem, clearly unaware of them; the pictures were frequently cited as evidence of his unsuitability for the post.

A commemorative plaque and statue representing poetry and music designed by the architect Sir Goscombe John was unveiled in 1930 in Ynysangharad Park.

Versions of Hen Wlad Fy Nhadau are used as anthems in both Cornwall, as Bro Goth Agan Tasow, and Brittany, as Bro Goz ma Zadoù. There also seems to be a version sang in India. The Khasi people in North East India have adopted our anthem as their own – Ri Khasi is sung to the same tune, this goes back to the 1800’s when Welsh medical missionaries went to the area.