The Mab Trail is a storytelling and art trail in Pontypridd based on the stories of ‘The Mab’, a bilingual re-telling of the ancient Welsh tales of the Mabinogi – some of the oldest written stories in the UK. The trail is sponsored by Pontypridd Town Council in partnership with Pontypridd Children’s Book Festival. 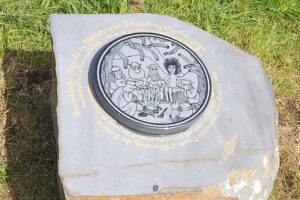 The tales were first written down in the 14th century in two books, Llyfr Gwyn Rhydderch (the White Book of Rhydderch), and Llyfr Coch Hergest (the Red Book of Hergest). The stories in ‘The Mab’ are about monsters and magicians and knights and giants.  They take place in both the real world and the Otherworld, a land of magic and enchantment.

The starting point of the Mab Trail is Pontypridd Museum.  In Ynysangharad Park you’ll meet the Women of The Mab.  On Berw Road Field you’ll find the Magic of The Mab and finally, the Animals of The Mab are on Pontypridd Common.

The book is co-edited by Eloise Williams (former Children’s Laureate & Welsh Poetry Competition judge) and author / broadcaster Matt Brown. The book features the eleven stories of the Mabinogi re-told by eleven of Wales’ finest children’s writers.  The stories have been translated into Welsh by Bethan Gwanas and the foreword to the collection is written by Michael Sheen.