A stroll through any town in the UK today might make you see the world in rose-coloured glasses. Why? Well, everything is pink! Roses here, chocolates there, cards the size of double-decker buses. And all those lovely hearts and cherubs. Ah, blydi lovely.

So where did this additional layer of over-the-top capitalist consumerism come from? Some say the Catholic Church who murdered at least three different saints named Valentine and others go back further and point to the Roman pagans. 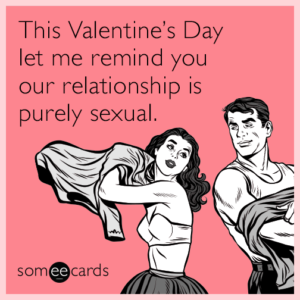 Emperor Claudius II decided that single men made better soldiers than those with wives and families, so he outlawed marriage for young men. Valentine, realizing the injustice of the decree, defied Claudius and continued to perform marriages for young lovers in secret. Unfortunately for him Claudius found out and had his head lopped off.

One legend sees an imprisoned Valentine sending the first “valentine” greeting himself after he fell in love with a young girl (his jailor’s daughter) who visited him in clink. Before his death, he wrote her a letter signed “From your Valentine,” an expression that is still in use today.

One thing we do know though is that those pesky Christians did try to steal Valentine’s Day (which is celebrated in the middle of February) to ‘Christianize’ the pagan celebration Lupercalia, which was a fertility festival dedicated to Faunus, the Roman god of agriculture, as well as to the Roman founders Romulus and Remus. Roman priests, would gather at a sacred cave where the infants Romulus and Remus, the founders of Rome, were believed to have been cared for by a she-wolf or lupa.

Lupercalia was outlawed by Pope Gelasius who declared instead that February 14 would be St. Valentine’s Day. It was not until much later, however, that the day became definitively associated with love.

Today, it’s all gone bonkers of course and according to the Greeting Card Association, an estimated 145 million Valentine’s Day cards are sent each year, making Valentine’s Day the second largest card-sending holiday of the year after Christmas. Women purchase approximately 85% of all valentines cards because lets be honest, men don’t give a shit about crap like this.

Anyway, enjoy the day I have to go and start the bulldozer.  That huge mountain of paper piled up outside my door won’t shift itself.